Toward A Native-canadian Equal Rights Amendment: Replacing The Current Official Languages And Indian Acts In Favour Of A Rejuvenated Constitutional Framework For The Preservation And Promotion Of Aboriginal Languages And Cultures (paperback) 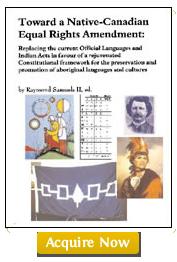 This book could be the most innovative constitutional proposals in Canada since the initiative of the Canadian Charter of Rights and Freedoms in the early 1980's.

The editor presents a rejuvenated Official Languages Act, which embraces multiligualism (in association with Canada's current policy of 'multiculturalism'), including aboriginal languages, which are currently being endangered by current policies. The current Official Languages Act in Canada pivots on a institutionally racist mythological conception of "founding nations".