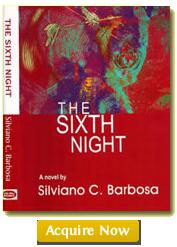 The novel portrays the travails of a Catholic girl growing up in traditional Goa, India of the 1950s during the last decade of the Portuguese rule.

An old Goan custom declares that the goddess who visits the child on the sixth night after birth determines the destiny of the child forever. Was it her destiny to be beautiful, lively and excel at everything and yet be unhappy?

May be the goddess had not felt welcome enough. She falls hopelessly in love with a foreigner, only to lose him abruptly during the Indo-Portuguese conflict of 1961.

Left alone, ostracized, helpless and pregnant with a half-Portuguese love-child, she struggles with thoughts of despair, single motherhood and the pain of separation as life drags her through three continents ultimately landing her in a new country -- Canada.

A story of love, hate, jealousy and intrigue -- great insights into Goan life, traditions and customs. Will bad karma haunt her all her life? Or will her steely determination and innate goodness change what was written on the Sixth Night?

The book starts with a detailed nostalgic background of the Goan village life, slowly taking the reader to a fast life of a Liceista at Liceu Nacional Afonso de Albuquerque in Pangim, where the novel reaches its climax and the protagonist feels the after-effects of Indian invasion/Goan liberation, and from there the last part of the book takes the reader through complexities in life through the U.K. Portugal, Germany and finally to Canada.

With heavy doses of nostalgia, humour, usage of Konkani and Portuguese words to give the novel an authentic touch of a life in pre-liberation Goa, the novel is a feel-good kind of a story, which rewards the reader for going through over 300 pages of interesting intellectual, social, and political stimulation, deductive reasoning, logical conclusions, and historical exclusions.

From the Critics
What's the Sixth Night, or Sottvi Raat?
It's an old Goan belief, which the author expresses in a couplet down below:
No matter how hard you try
No matter what you do
What is written on your Sixth NightWill always come true

Silviano Barbosa, the author, weaves a very fascinating narrative around this old Goan belief, exposing the social mores based on caste iniquities and servile mental attitudes implanted to the very core of the Goan psyche by the feudal and colonial hierarchies during that period of Goa's history.

The story revolves around Linda Antonieta Cardoso, born to Joanita Dias of Navelim and Mário Cardoso of Cuncolim on the twenty-seven October 1944. She is born in the Shudra caste, the lowest caste in the Goan caste structure, and her ancestors were toddy tappers.

As one goes reading the novel, it appears, that Sottvi, the Goddess of the Sixth Night, inscribed an exceptional future in Linda's destiny. Sottvi endowed her with a gift of intellectual curiosity, giving her a strong will to fight against the prejudices that kept humans in subservient oppression in the society that she was born in.

Linda's consciousness awakens to the injustices of the caste system, for the first time, when she was about nine years old. It happened in her village Church. She had gone with her mother Joanita to the Passion Service, and they were lucky to have seats in the pew at the back. But when an upper caste woman who had arrived late to the services, orders them to vacate the seats because they are of lower caste, and that the seats be given to her, Linda rebels and fights for her rights, creating a commotion in the Church.

Much later on, when Linda was a student at Liceu Nacional Afonso de Albuquerque - Portuguese High School, in Panjim, the fellow students, who came from the Goan elite class and some from Portuguese Europeans, looked down upon her because she didn't belong to their social status. She was just a plain village girl. The snobbish attitudes of her fellow students hurt her. She fought them by coming at the top of her class, thereby demonstrating that she was not only intellectually superior to them but a better human being.

We pursue the romance of Linda and Carlos Soares, a Portuguese bureaucrat, who was an attaché to the Governor's Colonial Office in Panjim. Fate throws a lot of insurmountable hurdles on their way, making their union almost impossible. But in the end, purity of feelings and true love overcomes them all, and the couple gets married not in Goa, nor in Portugal, but in St Michael's Cathedral in Toronto.

You and I may not believe it, but Joanita, the mother of Linda, who came all the way from Goa to attend the wedding of her daughter, is certainly convinced that the Sottvi, the Goddess of the Sixth Night, inscribed the incomparable future of her daughter on that auspicious sixth night of her birth.

I enjoyed reading The Sixth Night. - Lino Leitão (Book Reviewer) - author of The Gift of the Holy Cross