The Proposed Canadian Automobile Transport And Arctic Climatic Protection Act: Toward An Environmentally-sensitized And Truly Made-in-canada Car Inspired By The Avro Arrow 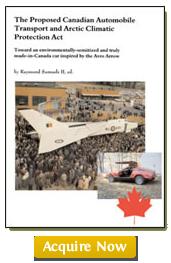 The Proposed Canadian Automobile Transport and Arctic Climatic Protection Act: Toward an environmentally-sensitized and truly made-in-Canada car inspired by the Avro Arrow, was written with the recognition that Climate Change associated with Global Warming, is a 'life and death' matter for all living species on planet Earth, including human beings. However, pro Big Business governments indicated that redressing Global Warming through the Kyoto Protocol would "hurt" economies.

That way of stating things is a dis-information strategy. What can be worse to economies that are destroying our planet Earth that living species depend on for their quality of survival?

Affirming Kyoto Protocol toward even more ambitious environmental protection is the only rational course to prevent the destruction of environment which human beings depend on for their quality-of-survival. The global economic system needs to be re-structured away from destructive fossil fuel dependency, and into accepting zero-emissions electric automobile and other such repressed "eco-friendly" technologies.

This book further recognizes the need for protection of the Arctic as a vital climatic area, which along with the Antarctic polar region, vitally moderates Earth's climate, along with being an integral part of Earth's planetary ecosystem. Canada could be providing vital leadership on helping to save our planet from destruction, through technological innovation, which affirms the Kyoto Protocol. However, Canadian leadership on the vital issue of Human-made induced harmful Climate Change, has been substantively undermined by the prevailing government in Canada, which has sought to protect greed-driven Big Business interests, over human quality-of-survival in Canada, and on planet Earth.

The Petroleum industry in Canada and globally, has been singularly responsible for holding the whole of planet Earth ransom as it pursues its greed-driven profiteering interests. The political fortunes of politicians in Canada, and internationally, whether in supposed democracies or dictatorships have become inextricably linked to the ability of these politicians to attract billions of dollars in streams from Petroleum industry related interests. In turn, Petroleum industry interests expect from politicians, their continued efforts to frustrate any legislative efforts to redress climate change, which would hamper them in their pursuit of greed.

Any government which stands up to the multi-billion Petroleum industry, which is singularly responsible for enforcing a fossil-fuel dependent economy, would be nothing short of courageous. This book is written for readers to see the kind of legislative context, that such a prospective courageous government would champion.

Fossil-fuel dependent automobiles continue to be a substantive part of the Greenhouse gas accumulating context. This book proposes to create a Community-owned made-in-Canada full-sized zero emissions electric sedan, as a focal point in transforming the identity of the Canadian automobile industry.

The "Auto Pact" in Canada has created a U.S. parent-company owned automobile industry which focuses on commercial profits, at the expense of a Global Warming context that is destroying Canada's Arctic Climatic area, along with its vital ecosystem. This Act herein proposed for a prospective courageous federal government in Canada, a legislative context which is aimed at inspiring the transformation of a largely U.S. foreign owned automobile industry in Canada , into the execution of a Canadian environmentalization, of Canada's automobile sector.

The Avro Arrow which was developed in Canada during the 1950's (that was decades ahead of its time technologically), shows what Canadians can accomplish, as leaders of cutting-edge technological innovation. Notwithstanding this, the film documentary, Who Killed the Electric Car?exposes the repression of zero-emissions electric car technology by a private sector toward the commercial profit objectives of the automobile industry, that is in league with the Petroleum industry. Government in Canada which is inspired by the urgency of providing leadership on combating Climate Change over the commercial profit interests which threaten our planet, can provide the kind of leadership on the mass producing of a made-in-Canada zero emissions car, within the technical results, which had been achieved in the Avro Arrow project.

The proposed Canadian Automobile Transport and Arctic Climatic Protection Act, is an initiative to create a civic partnership between responsible government, and Canadian community shareholders, and is aimed at mass-producing a zero emissions made-in-Canada automobile. The goal of such a government initiative would pivot on helping to expedite the transformation of the automobile industry in general, in a manner which will protect Canada's Arctic, along with the rest of our planet Earth.

Governments from Sweden, to other parts of Europe, and Asia have traditionally been a major driving force in the development of independent national automobile manufacturers. It is about time that Canada stop economically relying on largely U.S. owned auto giants, and the petroleum industry allies, which are collectively destroying the planet, and instead take leadership on the mass-production of electric cars.