The Kyoto Protocol Is Not Enough! Replace Capitalistocracy Including The Gdp Index Toward A New Political Economy Of Social Justice And Environmental Protection : Agora Publishing Consortium: Trade and Book Self-Publishing Services

The Kyoto Protocol Is Not Enough! Replace Capitalistocracy Including The Gdp Index Toward A New Political Economy Of Social Justice And Environmental Protection 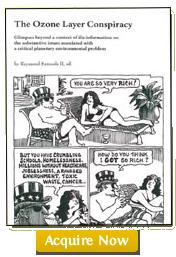 General description: There are apparently some people who think that the current "Greenhouse Effect" will simply lead to an "evolutionary" change in the global climate, so that climatic areas in the northern hemisphere like Canada, Scandinavia, Russia, Alaska in the U.S., and Antarctica in the southern hemisphere will become like one big tropical resort area like Tahiti, Cuba, or Jamaica. Soon everyone will be enjoying glorious sunshine, and sipping exotic tropical drinks in Nova Scotia, Baffin Island in the Canadian Arctic, or around the Arctic waters of Siberia, according to people with this apparent view. These people profess a dislike for the cold, and they therefore welcome any change that might eventually get rid of their abhored winter blaaaaahs.

Unfortunately for these people, such a view is not supported by critical scientific evidence, beyond "scientific infomercials" and propaganda pieces that have been sponsored by various well-financed Big Business interests. Indeed, it has been the job of the largely corporate owned mass-media in Canada, and elsewhere, to channel viewers, readers, and listeners into responses which will complement the elite pursuit of insatiable commercial profit. This corporate owned mass-media does not want to draw public attention to the dire fate which awaits the public, if 'the Economy' is not rejuvenated in a manner that minimizes social and environmental costs.

The large scale 'owners of capital' have structured the prevailing capitalistic economy to principally serve their interests in the pursuit of money, status, and power for themselves. Like heroine or "crack" cocaine drug addicts, 'capitalistocrats' have become so addicted to the pursuit of a self-absorbing materialistic lifestyle predicted on money, status, and power, they would much rather apparently destroy our planet, and all life along with it, than to change their ways of drug-like abuse. Indeed, the mass-media in the prevailing capitalistocratic systems of Canada, the United States, United Kingdom, continental Europe, and elsewhere, are no less corrupt than the politicians which they are supposedly "holding accountable".

The mass-media has apparently covered-up the fate that awaits humanity, and the rest of our planet, if there is not an immediate substantive response to the Global Warming threat beyond the relatively superficial responses associated with the extremely slow responses to fulfilling the relatively superficial Kyoto Protocol. Indeed, failure to redress Global Warming with great alacrity, will not mythically result in northern hemispheres being turned into extensions of "tropical paradises".

The cold air masses that hover over the Arctic and Antarctic climatic areas of the planet are absolutely vital to moderating the temperatures of planet Earth. Global Warming by the irresponsible activities of greed driven private enterprises under American led "global capitalism", are destroying these vital climatic areas at an alarming rates.

As a human species, we have already witnessed deadly heat waves and humidity. The accompanying worsening cancer causing ultra violet (UV) rays due to rapid accompanying ozone depletion is already creating experiences which almost feel like a form of radiation poisoning. Further accompanying weather cataclysms including more devastating hurricanes like Hurricane Katrina in New Orleans in late Summer 2005, and other such "weather events" are only a relatively small tip of the iceberg so-to-speak. The "hellish" summer of 2005 internationally has poignantly showed relative to the comparatively milder Summer 2004, that changes due to the abusive activities by human beings on the planet can be sudden, and extremely drastic. The current quantuum advancing devastating destructive impacts of American-led "global capitalism" are threatening to precipitate a catastrophic global drought in vital agricultural areas internationally that the world has never ever seen; due to unending rising temperatures, that will make the traditional temperature characteristics of the tropics today (that have benefited from Arctic and Antarctic moderation) seem like comparative ice boxes. Worsening "hellish" summers will lead into hellish other parts of the year also, with the prospective disappearance of the Arctic and Antarctic climatic areas. The inevitable result of such allowed phenomenon will be an ensuing Global Famine that so far, the world has also never seen spreading from the United States and Canada, into Europe and the rest of the World.

The rising temperatures of the oceans would eventually completely destroy all vital air (oxygen) producing plankton. A global crisis in agricultural production would be further accompanied by the cascading rapid dying out of all species in the ocean. The oceans would become dead polluted waters (the Gulf of Mexico has already been basically destroyed, with other parts of the ocean following pursuit).

In such a milieu of Global Famine, the world would be taken over by various warring military camps threatening each other with nuclear annihilation, and privately-run "terrorist" organizations trying to forcibly acquire what little of the Earth is left, for the exclusive use of elites, criminal syndicates, and gangs, leaving "masses" to perish in a milieu of spiralling global starvation, and poverty in a climate of socio-economic chaos and societal upheaval. Indeed, the mass-media has hypocritically ignored the extent to which 'capitalism' is actually the root cause of growing apparent "terrorism" as more and more people are turning to violent political extremism, in the face of environmental destruction, related oppression, and overall declines in quality-of-living.

Having destroyed the air-producing ocean life, and rainforests under a greed driven ethos of capitalism, soon even the Global Air Supply would become threatened with the overall rapid decay of vital ecosystems. Global Warming promises the convert the whole Earth not into a tropical paradise, but rather into a giant coffin, where all life on the planet will miserably perish. The Earth will eventually become very similar to Mars sooner than you think, unless the whole economic system can rejuvenated from its self-destructive path of Global Warming and accompanying pollution including ozone depletion. The human race will simply become a footnote for other possible space exploring advanced species in the universe to study in their future scientific missions of archaeological discovery, unless humanity changes from its current overall destructive ways.

People in their communities can either choose to play Ninetendo games, and worry about various other materialistic lifestyle considerations in "blissful ignorance", in the image of the elites who prevail over self-destructive capitalistocracies, or alternatively, people can choose to rally their governments for vitally needed social change. 'Sober' members of the diverse public must either become actively engaged in redressing the shortcomings of the prevailing economic system, or face the dire consequences of their jaded attitudes. Members of the diverse public who are concerned about their immediate quality-of-survival cannot afford to be complacent. These members of the diverse public must use what little that remains of destroyed democratic systems (that have been taken-over by the substantive operation of 'capitalistocracy') to challenge corrupted government leaders.

Government leaders have allowed themselves to be seduced and "bought-out" by self-serving greed-driven interests, that operate against the vital affirmation of the quality-of-living interests of the diverse public that these leaders were supposedly elected to serve; and against the interests of quality-of-living seeking human beings internationally. So far, these government leaders have chosen to substantively ignore capitalistocractic activities that precipitate Global Warming, and accompanying...