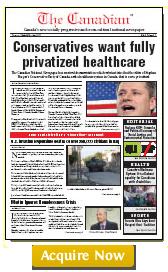 General description:The Canadian is an editorially independent and not-for-profit national newspaper. It is inspired by Canada's very first newspaper called 'Le Canadien', that was founded in 1806.

We are committed to affirming a sovereign Canada, by defending the national public interest via a critical approach to mass-media coverage. The aspirations for a sovereign Canada had inspired the journalists of 'Le Canadien', as well as Tommy Douglas, former Prime Minister Trudeau, and other Canadians, toward the pursuit of the Canadian Dream. Trudeau had specifically referred this Canadian Dream, as the pursuit of a socially progressive 'Just Society'.