Outlaws Of The Kimberley Underworld: The True-life Story Of Smokey, King Of The Horse-duffers : Agora Publishing Consortium: Trade and Book Self-Publishing Services

Outlaws Of The Kimberley Underworld: The True-life Story Of Smokey, King Of The Horse-duffers 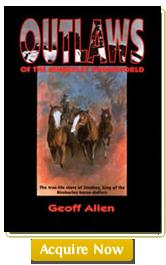 One hundred years ago, as the Boer War came to an end, the rugged Kimberley Range formed the roughest and most remote cattle-country in Australia. It was five days hard ride from the nearest township of Wyndham to Smokey's Kimberley Underworld hideout. The police patrols sent out to arrest King Smokey faced a daunting task. The few passes through the forbidding King Leopold Ranges were guarded by fierce Aboriginal warriors known as munjons. The munjons waged a bitter war with the white stockmen; but for every spearing of the cudeas' cattle, there were savage reprisals and massacres.

For Smokey and his loyal teenage follower Colt, there is the ultimate freedom of fast-riding outlaws. Whether it's stealing mobs of horses or seducing young women. Hunting down a brutal murderer or escaping from the mounted troopers with their black trackers, sex in the billabong with Pixie and Jilly or riding an outsider in the Wyndham Cup, the Colt leads a life of which every young man dreams.

In the tradition of master story-teller Ion Idriess, Outlaws of the Kimberley Underworld is an action-packed thriller that makes the American Wild West look like a kindergarten.