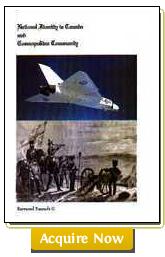 General description:"The question of national identity in Canada has been an enigma in the experience of Canadians. As a society, the country continues to be hindered by a historical context, evading exposure in the prevailing environment and eroding a vital identity. The term 'national identity' expresses a state of societal maturation that Canada appears to critically lack. National Identity in Canada and Cosmopolitan Community explores an 'enforced state' of societal immaturity that works against a milieu of national civic unity in Canada."