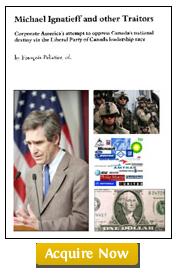 The book explores the extent to which Mike Ignatieff is an opportunistic political mercenary as well as an apparent traitor, who seeks to dismantle and to deliver Canada to ultra-right U.S. interests (and their commercially wealthy "Quisling" confederates in Canada). Is he a Liberal impostor? 'Michael Ignatieff and other Traitors' was edited by a scholar in Canadian politics, and political history, who has strategically participated in the Liberal Party of Canada political campaigns. The editor has supported vital causes toward helping defend the political legacy of former Prime Minister Pierre Elliot Trudeau, who critically championed Canada's national identity as a socially progressive 'Just Society'.

Book excerpt:Although Mr. Ignatieff is often compared to Trudeau (and does nothing to dissuade those comparisons), the truth is that he and the late, great Prime Minister have nothing in common.

While Trudeau was a peace activist who campaigned tirelessly for nuclear disarmament, Ignatieff was largely responsible for passing the vote to extend Canada's mission in Afghanistan indefinitely, and has been an enthusiastic proponent of both the illegal war in Iraq and Missile Defence (aka Star Wars).

While Trudeau dedicated his life to this country, Ignatieff has been glad to spend the last thirty years of his life abroad, and only returned because a select group of backers convinced him he would become Canada's next Prime Minister.

While Trudeau was a passionate advocate for human rights, and fathered our own Charter of Rights and Freedoms, Ignatieff has famously endorsed certain modes of torture as being "permissible forms of duress".

While some journalistic hacks have taken it upon themselves to anoint Ignatieff "Canada's Next Prime Minister", no one thought to ask the Canadian people exactly how they felt about this. Since his leadership campaign has kicked into high gear, Canadians both inside and outside of the Liberal Party are rising up in protest, in ever-increasing numbers.