Legends Of The Outback 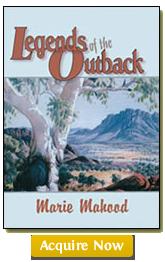 Outback writer Marie Mahood is the author if the much loved Icing on the Damper and A Bunch of Strays. In the 1960s she raised cattle and kids on the world's most remote cattle station, Mongrel Downs, in the Tanami Desert.

Here she writes about the heroes, visionaries and eccentrics of Australia's vast outback. Her thirty-two characters include the greatest drover and Gulf trekker of them all, Nat Buchanan; prince of poddy-dodgers Harry Redford; the cattle king Sidney Kidman; outback surveyor supreme and all-round good bloke Len Beadell; Aboriginal warrior Jandamarra; Mat Wilson at the N.T. Depot store; gun shearer Jackie Howe; drover Edna Zigenbine on the Murranji Track; explorer and goldminer Christy Palmerston in the heartland of Cape York Peninsula; eccentrics such as the Gulf hero and the Barkly Hermit; and drover who were also painters and poets of repute.

Thirty-two life sketches written with affection, wry humour and respect. For these were no ordinary men and women; their feats are writ larger than life in the annals of the Australian outback. -- Old Silvertail