Debunking Economics: The Naked Emperor Of The Social Sciences 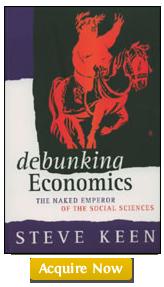 I wrote Debunking Economics mainly to assist non-economists understand the flaws in conventional economic thinking that, to put it politely, were not well covered by most economics textbooks.

There are many such flaws. Most were established by economists who were critics of the dominant school of economic thought, known as "Neoclassical" economics--though one of the most important is, in soccer terms, an "own goal": the "Sonnenschein-Mantel-Debreu conditions" which establish that a "well behaved" market demand curve can't be derived from "well behaved" individual demand curves.

I didn't expect to add anything new to the literature myself (apart from my already published critiques of Marxian economics).

However, while writing the book, I discovered a flaw that, I thought, no-one else had previously seen: a logical error in the Marshallian model of "perfect competition". I put the argument in chapter four ("Size Does Matter"), and left proving it mathematically until after I had finished the book.

I had an inkling of how neoclassical economists would react to this, having read many hostile papers--and in my opinion, frequently mendacious papers--in response to previous critiques. But even I was taken aback by the force of the reaction to that one chapter of the book.

With the book behind me, I delved into the mathematical details of the argument--with the help of several colleagues, especially John Legge (Monash University, Australia) and Russell Standish (University of New South Wales, Australia).

Initially, I was surprised to find that the essence of my critique had been made by the staunch defender of neoclassical economics George Stigler, in his 1957 paper "Perfect competition, historically contemplated". This was that the demand curve facing the individual firm couldn't be horizontal--as all economics textbooks claim it is--but instead had to have the same slope as the market demand curve (given the assumptions of the Marshallian model).

Mr. Stigler, as one could expect, found a way to rationalise this inconvenient fact that seemed to preserve the neoclassical talisman of "perfect competition"--though every economics textbook, and probably 99% of neoclassical economists, ignored the fact itself, and continued with the "horizontal demand curve" fallacy.

I instead kept probing: a fallacy is a fallacy, and it can't be made to disappear without introducing further fallacies in its place. As I continued to explore, I was delighted to find that the key fallacy was something that is almost a mantra for neoclassical economists: that "profit is maximized by equating marginal cost and marginal revenue".

No it isn't--not when there's more than one firm in an industry. I derived a formula that shows the real profit maximizing output level for multi-firm industries, and it undermines the obsession that neoclassical economists have for "perfect competition" as an ideal market type.