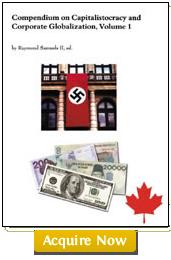 Mass-media propaganda stipulates that capitalism spreads democracy, when in fact capitalism does not spread democracy. Capitalism spreads 'capitalistocracy'. In turn, capitalistocracy seeks to undermine democracy, toward the pursuit of insatiable commercial profit, status, and power. Read this book to get a critical supplementary appreciation of Corporate Globalization, which is creating a trail of human suffering, and overall environmental destruction. This book critical presents that replacing oppressive capitalist value system is vital for human survival.

The rule and social control of society by commercially wealthy interests, under an ethos of greed, which totally ignores worsening social and environmental costs.

From the "War on Terrorism" to Global Warming:

"Anti-Terrorism" legislation is being used to sabotage the prospective development of democratic societies in behalf of capitalistocrats, toward a fascistic "New World Order" of greed, tyranny, and social control. Meanwhile, Global Warming, and worsening pollution, is leading our planet Earth into a catastrophic environmental holocaust