Capitalism Is Not Democracy 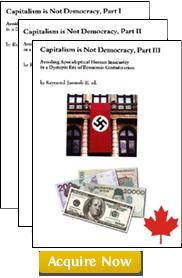 Book reveals Capitalism is about "capital" and not people.

The current so-called "global" economy is on a reckless course of on-going self-destruction, which threatens World War III. This self-destruction is being caused from a glorification of the pursuit of commercial profit irrespective of social and environmental costs, which in turn creates a 'culture of violence' and war.

The well-being of people are the last things on the mind of most financially wealthy elites. These elites do such things as fire people from their jobs without thinking twice, or create knowingly unhealthy and dangerous products in order to maintain high levels of commercial profit. These elites also do things like instigate so-called "Wars on Terrorism" in order to subtantially pursue "oil riches", that create hundreds of thousands of civilian casualties.

The book "Capitalism is Not Democracy" exposes that market capitalism in association with so-called Globalization is about furthering the interests of principal owners of "capital", and not people. These principal owners of capital are elites who own the largest corporations. The net result of "capitalism" is worsening human suffering; as well as environmental destruction, from pollutions to Global Warming.

Elites and their representatives have preached in popular culture that market capitalism goes hand in hand with democracy. These elites include U.S. President George W. Bush who talks about the "spread of markets" as "spreading democracy" throughout the world. This book substantiates that such statements are simply propaganda toward the manipulation of "the masses". This book systematically presents that market capitalism actually undermines the democratic development of society.

The book 'Capitalism is Not Democracy' not only presents a very well-considered, insightful and easy to read critical perspective on capitalism, compared to other treatments on this subject area.

Raymond Samuels, the critically acclaimed author of this book, is a member of the University of Toronto. He also furthermore presents a comprehensive alternative to capitalism, not available in other books. Indeed, the publishing industry is largely owned by corporations. These corporations seek to "dumb-down" the diverse public from becoming critically aware to such progressive alternatives to capitalism.

The author presents a people-economy which would affirm human rights; social justice toward the eradication of poverty; a context for global peace; and environmental protection, in a manner that would support democratic societal development.