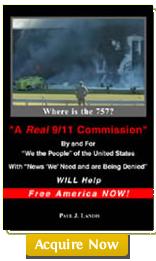 The book entitled A Real 9/11 Commissions Will Help Free America Now! was written to provide evidence before it was filtered by Bush and Cheney, or removed by our controlled mainstream media.

The reader is invited to see pictures from documentaries of footage that was shown on live TV the morning of 9/11 and provided the opportunity to participate, to 'Render a decision' on the evidence seen, both manually and on-line.

In May 2006, a Zogby International national poll found that 42 percent of adults polled believe the U.S. government and the 9/11 Commission "concealed or refused to investigate critical evidence" that contradicts the official explanation of the attacks. And, 9/11 Commission chairs Republican Thomas Kean and Democrat Lee Hamilton, say in their new book Without Precedent: The Sept. 11 commission was so frustrated with repeated misstatements by the Pentagon and FAA about their response to the 2001 terror attacks that it considered an investigation into possible deception.

In addition to the 42% above, the same May 2006 national Zogby respondents say "More than 40 percent of Americans believe that the 9/11 Commission Report that investigated the Sept. 11, 2001, terrorist attacks is a cover-up".

Wow! And now, hold on to you hats: based upon a review of their book Without Precedent, we have significant doubts being expressed by these two 9/11 commissioners: Join us Mr. Kean and Mr. Hamilton in "A Real 9/11 Investigation".

A key question for a "A Real 9/11 Commission" or if you like, a new, trustworthy 9/11 commission is What would it do differently?

How would or could, Don Rumsfeld prove to the American people that the 757 he says hit the Pentagon really did? If asked, participants in "A Real 9/1 Commission" would say, "he can't!" Not only are there NO pictures showing a 60 to 80 ton 757 on the lawn of the Pentagon, we would play for Don the 9/11 AM CNN Live report on Loose Change 2nd edition "there is no evidence that a 757 has hit anywhere near the Pentagon!"

We would also remind Don that the famous collapsed Pentagon wall section, if that is where he tells us the plane is? That section collapsed twenty minutes after the explosion. Did the 757 just wait around for a hole to climb into?

So Mr. Kean and Mr. Hamilton, any comments?

The New York City Twin Towers, where 3,000 people lost their lives, we were told 'collapsed' because of the planes that hit them. If we asked Don or Dick Cheney to prove this, what could they use? There is a NTST report that supports this claim. But does the evidence support this report?

Briefly: No. We now know that molten steel, 3,000 degrees, was found in the sub-basements of both Towers (and WTC 7) four and five weeks after their collapse. We can only suggest in the space available here, that the reader look at the Special Report in A Real 9/11 Commission Will Help Free America Now on pages 32 to 52 and on the books web site.

And live video recordings of the Towers 'collapse' with the sounds of the 'demolition charges', would that help Don and Dick? Obviously not: see "911 Eyewitness", by Mr. Ricard A. Siegel.

We might ask the commissioners: How is it that the collapse of these structures produced only pulverized debris and steel beams conveniently cut into sections that fit on the backs of the trucks used to haul them away? And if the Towers 'collapsed', where did the 2,600 pollutants come from that have thus far claimed the lives of twelve "First Responders" and caused 70,000 illnesses?

For the assertion that Flight 93 crashed in Pennsylvania, we will just suggest you see statements by coroners on the scene in Pennsylvania saying "there was no blood or evidence of human remains at the site", Loose Change Second Edition, www.loosechange911.com.

So Don and Dick appear to have no EVIDENCE to justify the statements they made. How about Mr. Kean and Mr. Hamilton, perhaps they want to explain their lapse of finding the above EVIDENCE or any EVIDENCE that the 42% of poll respondents say was ignored?

On a Book TV interview about their book "Without Precedent", Mr. Hamilton states, "we were there to tell the story." Unfortunately, the moderator, Mr. Marvin Kalb was too busy being polite and never asked: "What story? The one Mr. Bush and Mr. Cheney told us or the one substantiated by facts?"

"Very recommended: "Be sure to check out the great work done by Lynn Pentz and the L.A. Citizens' Grand Jury. Their results, note this Mr. Kean and Mr. Hamilton, match the above information page 158.