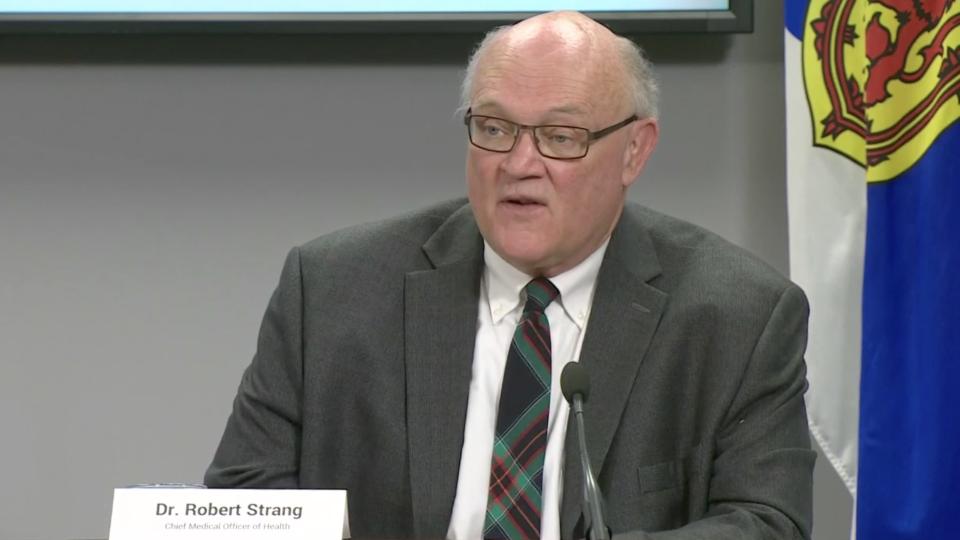 HALIFAX -- Nova Scotia is reporting two deaths related to COVID-19, along with 17 new cases on Wednesday, as the active number of cases in the province drops to 311.

In a release, Nova Scotia health officials say two men, both in their 60s, have died in the province's Central Zone. There have now been 87 COVID-19 related deaths in the province.

"Our thoughts and prayers go out to the families and friends on behalf of all Nova Scotians," said Nova Scotia Premier Iain Rankin during a news conference on Wednesday afternoon.

The province also reported 17 new COVID-19 cases, as well as 72 recoveries on Wednesday.

According to a release from the province, 12 of Wednesday's new cases are located in the province's Central Zone - eight of the cases are close contacts of previously reported cases, two are related to travel and two are under investigation.

Three new cases are located in the province's Eastern Zone, and are close contacts of previously reported cases.

There is one new case in the province’s Northern Zone, related to travel outside of the province.

There is one new case in the province's Western Zone, which is currently under investigation.

Public Health says there is now “limited community spread” in the Central Zone. The Eastern, Northern and Western Zones continue to be closely monitored for community spread.

The province has confirmed its first case of a rare blood clotting condition known as vaccine-induced immune thrombotic thrombocytopenia (VITT).

The province says the case involves a man in his 40s who received his first dose of the AstraZeneca COVID-19 vaccine in early May. He developed symptoms about two weeks after vaccination, has received treatment and is recovering.

"He become symptomatic a couple of weeks after getting his first dose of AstraZeneca vaccine. He has been treated and is thankfully recovering," said Dr. Robert Strang, Nova Scotia's chief medical officer of health.

Anyone who received a first dose of Pfizer or Moderna can choose either vaccine for their second dose.

"There's evidence coming out of both Britian and Spain that suggests that not only is it safe to take a different vaccine for the same dose but also that it may also be very effective for stimulating your immune response," said infectious disease specialist Dr. Lisa Barrett.

On Wednesday, Nova Scotia officially moved into Phase 1 of a five-phase reopening plan with each phase expected to last two to four weeks.

"It's really important that we listen to the current restrictions in place or we won't achieve those dates," Rankin said. "What I won't do is put hard dates out there and commit to them."

Rankin and Strang rejected criticism that the province was re-opening too slowly.

"It would be irresponsible for us to just choose an arbitrary date," Rankin said. "We're taking an incremental approach, based on vaccine uptake and hospitalization."

Strang said he understands that people want dates, or more certainty, but it's not possible.

"Some people want more certainity and some want us to reopen faster, but there is no certainity with COVID-19," said Strang.

Strang said that until 75 per cent of the population is protected with two doses of COVID-19 vaccine, the vaccine alone does not provide the herd immunity required to drop restrictions.

"That's why we will need to have some restrictions over the summer," Strang said. "Our current slow and steady approach will ensure that once we open, we stay open."

Strang said that to get to the 75 per cent figure in the overall population, 85 per cent of all eligible age groups would need to be vaccinated.

"Population immunity is coming," Strang said. "Being a tortoise among hares is a good for our collective health."

As for travellers being able to provide proof of vaccination to avoid needing to quarantine for 14 days, Strang said it's an issue that is being addressed at the federal level so there is the same standard across the country.

When asked why a special system is needed and people just can't provide proof themselves, Rankin was blunt.

"People were less than honest and that's what caused the third wave," Rankin said. "We want a credible system. We want to make sure that we are protecting Nova Scotians."

According to the province's online dashboard, there are currently 38 individuals in hospital, 15 of whom are in the intensive care unit.

There are cases confirmed across the province, but most have been identified in the Central zone, which contains the Halifax Regional Municipality.

The provincial government says cumulative cases by zone may change as data is updated in Panorama, the province’s electronic information system.

The numbers reflect where a person lives and not where their sample was collected.

Nova Scotia's COVID-19 online dashboard provides an update on the number of vaccines that have been administered to date.

As of Wednesday, 594,708 doses of the COVID-19 vaccine have been administered, with approximately 56.1 per cent of the province's overall population having received at least one dose.

Appointments cannot be booked directly through a community clinic, pharmacy or physician. Walk-ins will be turned away.

Public health is strongly encouraging Nova Scotians to seek asymptomatic COVID-19 testing, particularly if they have had several social interactions, even with their own social circle.

COVID-19 tests can be booked through the province's online self-assessment COVID-19 tool, or by calling 811.

People can also visit one of Nova Scotia’s rapid pop-up testing sites that continue to operate throughout the province.

The app, which can be downloaded through the Apple App Store or Google Play, notifies users if they may have been exposed to someone who has tested positive for COVID-19.

Anyone who experiences a fever or new or worsening cough, or two or more of the following new or worsening symptoms, is encouraged to take an online test or call 811 to determine if they need to be tested for COVID-19: