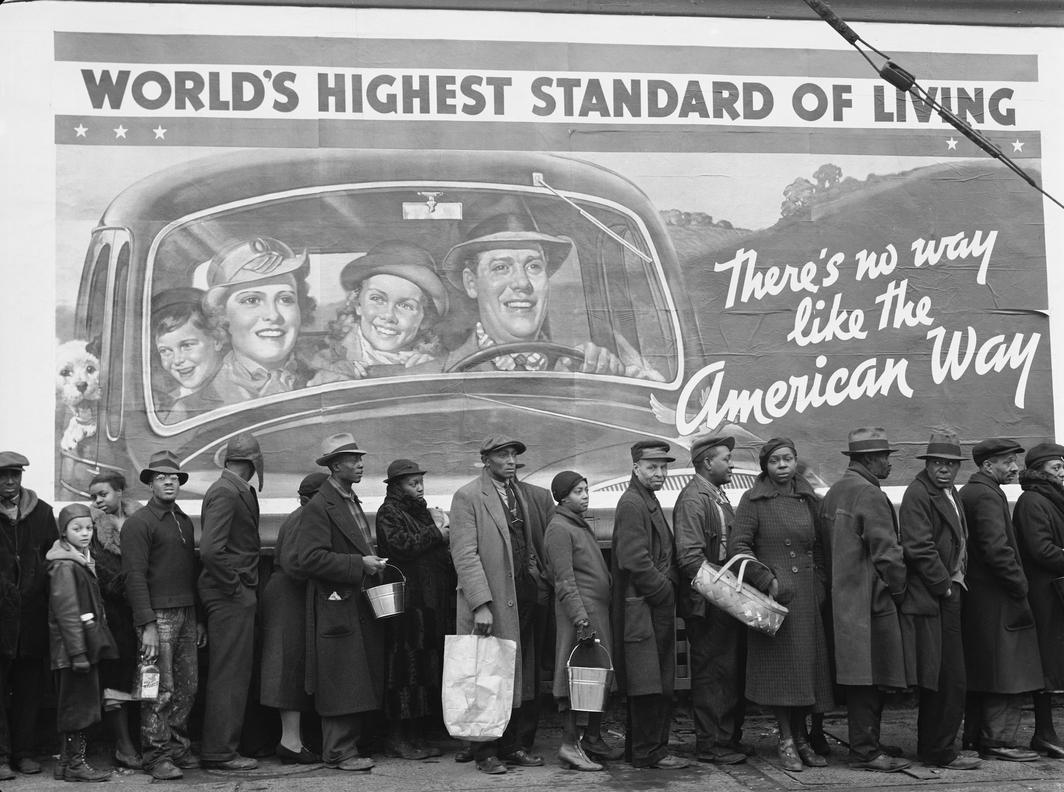 IN ONE OF photojournalist Margaret Bourke-White’s most iconic Depression-era images, a seamless, whitewashed vision of the good life is undercut by a segregated breadline. Tightly composed, the picture almost stages a return of the repressed, as material casualties of “the American Way” buttress—but also contravene—the billboard’s sanguine promise. Bourke-White’s irony is acerbic, condensed, and at the same time capacious; as art historian John Tagg points out, the absurdity of the background graphic’s “cynical corporate jingoism” rises to the level of kitsch, taking on the role of “fall guy, of comic stooge” when faced with the living effects of endemic racism and poverty. Divorced from its original context (the pages of Life magazine), the point-blank messaging of Bourke-White’s photograph and its easy application to chronic social ills can obscure its immediate historical circumstances. A contemporary viewer might interpret the breadline vis-à-vis the general economic distress of the 1930s, but the food insecurity on evidence also issues from a more specific event.

In 1937, a monumental flood swept the Ohio Valley, killing hundreds, displacing a million, and destroying billions of dollars of property (adjusted for inflation). Taken in a Black neighborhood in Louisville, Kentucky, Bourke-White’s image shows residents waiting for aid, likely from a large charitable organization like the Red Cross, local volunteers, or the federal relief workers from the Works Progress Administration (the “Shock Troops of the Disaster,” as a 1939 newsreel dubbed them) who were deployed en masse to the region. Tagg points out that the billboard is not just tone-deaf advertising, but in fact literal propaganda funded by the National Association of Manufacturers.1 In the ’30s, the group had positioned itself in opposition to not only organized labor, but also New Deal regulatory agencies, and wielded a public relations campaign to promote free industry against “misinformation” spread by “selfish groups, including labor, the socialistic-minded and the radical.”2 As such, Bourke-White’s photograph encapsulates historically particular ideological conflicts, not only between free-market patriotism and the lived reality of dispossession, hegemonic whiteness and those steamrolled by its over-representation—but also between an active welfare state and capital’s attempts to suppress it.